This web site was designed to help educate others on the fascinating world of treasure hunting. Here you can learn about various signs and symbols that the Spanish carved into the landmass to be used as mapping codes to lead them back to their many hidden treasures.

Changes and additions coming to this section.

Steve is our Global Projects Director for Historic Sites and Shipwrecks in Canada and is CEO of HSS corporate offices in Windsor Ontario and has been involved in Historic Sites and Shipwrecks since 1993. He is also deeply involved in the evolution of the HSS website from it’s inception to it’s current roll-out. Steve is also responsible for setting up Canadian and worldwide franchises in such places as South America, Australia and an assortment of other locations around the globe. He has spent countless hours researching historic sites and shipwrecks in Canada along with symbolic maps to treasure and mine sites carved into the landmass in Canada by the Jesuits who were with the French when they explored the country. Steve is involved in both future and current projects for HSS and has done extensive research on historic sites and ancient symbols from all over the world. Steve has been working diligently with Adrienne at corporate headquarters in Fort Lauderdale to keep all the HSS research as current as possible to ensure HSS members have the benefit of up to date information for any projects they may be working on. He is very approachable, extremely helpful and tends to go out of his way to ensure there is always plenty of support available when needed. 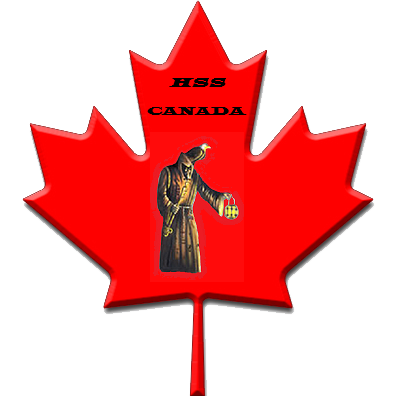 TOP LEFT Photo is an Aerial View in The Alberta Badlands;
TOP RIGHT Photo is an Aerial View of Oak Island Nova Scotia;
BOTTOM LEFT Photo was taken in Saskatchewan;
The BOTTOM RIGHT Photo shows the symbolic representation for a gold mine with the curl on the bottom of the “7”.  The seven itself at the top is showing where their campsite was located by giving you an X and 75 which makes 750 feet to just about where the farmer has built his house because of the water supply. The curl of the “7” points the way to the gold mine usually but in this sense it has been made to look like a shaft symbol so the mine is very close. The number of dots that make up the seven will usually give you the distance, it is meant to be seen from a great distance with a telescope. Up close you wouldn’t see anything so all your bearings and measurements have to be figured out before you go on site.

This Alberta Badlands photo has really stirred things up with HSS Canada and is a very exciting find for what it may mean to the history of this country.

This is a carving scene on a cliff on Vancouver Island in British Columbia and the Native people in the area believe their ancestors carved it. However we know that the Spanish had a fleet that went past British Columbia in the 16 and 1700’s on their way home from the Orient where they had spent a year or so trading. When they had shipwrecks this was one of the methods they used to show their people who came looking for them where they had wrecked as they knew their people would continue to search for one of these symbols locating the shipwreck. This symbol, the Mask meant Something Hidden. And all the information was included on where to find it. This may be one of the richest Spanish shipwrecks in Canada.. All that’s required is a trip to Vancouver Island to read the information and follow the codes with the proper equipment..

Steve is already putting together an expedition, collecting members, equipment and vehicles for an expedition to the Badlands of Alberta.

Once he gathers the qualified personnel and sets a time table, the expedition will be on its way, check back often for Steves reports.

Photo is an Aerial View in The Alberta Badlands

Photo is an Aerial View of Oak Island Nova Scotia

Photo was taken in Saskatchewan Canada

The loss of the  “TONQUIN” 1811 Vancouver Island, British Columbia, Canada

In the late 1960’s I was living in the English Bay area, Vancouver, British Columbia,Canada researching historic sites and shipwrecks in Canada and working in the logging industry. I found out through a mutual friend about a cannon that had been found offshore in the water on the eastern side of North Vancouver Island…….more